As many of you can see, I've been a pretty terrible blogger lately! What can I say...Life.

"Chronicles of Narnia: Voyage of the Dawn Treader (3)" Movie Review 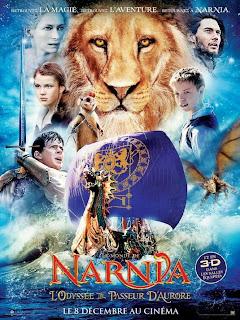 This is another one that I saw in theaters and was completely unsure about. I thoroughly enjoyed the first and second movie, especially since the only other version I had seen of the books was an old VHS recording of some ancient TV series that tried to recreate the books with the combination of live action actors and animation...Strange!
In the third installment, only Lucy and Edmund return to the fantastical world of Narnia, along with their annoying cousin Eustace Scrubb. The appear in the ocean where they are picked up by Prince Caspian, who appeared in the franchise for the first time in the second installment, The Chronicles of Narnia: Prince Caspian. This time, all of Narnia is being threatened by a creepy green smoke that is spreading across the sea, gobbling up ships and everyone on them. It's up to Caspian, Edmund, Lucy, and even Eustace to five the seven missing lords and their seven missing swords to break this curse and stop the evil green smoke.
It really sounds cornier than it is. Nevertheless, this is still my least favorite of the three movies out so far. It felt more like a series of four or five small stories rather than one whole storyline, making the whole movie a bit disjointed. Also, the green smoke had a tendency to bring out the "ugly" in everyone. Caspian was a bit power hungry, Lucy wanted to be beautiful like her sister, Susan, and Edmund is STILL haunted by the White Witch (I'm not sure how thrilled Tilda Swinton is about returning to these last 2 movies for a mere 5 minute cameo. I'd be done with it.)
But, the colors were beautiful, the effects were nice, and the actors were doing there thing. I also enjoyed watching Eustace go from fainting at the sight of a talking Minotaur, to getting teased for talking to a seagull, to asking if he could return to Narnia someday.
Written by AubrieAnne at 10:47 AM

Email ThisBlogThis!Share to TwitterShare to FacebookShare to Pinterest
Labels: Movies

Thank you for adding to the conversations! This blog is a part of the "Follow Me If You Dare Revolution!" Join the Revolution here...http://whosyoureditor.blogspot.com/p/do-you-dare_18.html...to promote the best kind of following!

Search Who's Your Editor?