As many of you can see, I've been a pretty terrible blogger lately! What can I say...Life.

Like I mentioned a few posts ago, I originally went to college for graphic design. It's something I enjoyed to an extent. I liked graphic design when I could do a lot of the stuff by hand and it didn't all have to be done with a computer. I also found a lot of success in graphic design, but in the end, it wasn't perfect for me. I knew I wouldn't always be able to do what I really wanted to do in that industry. Plus, not every graphic assignment in the professional world is as fun as the assignments in class.
So, today's method is Graphic Design! 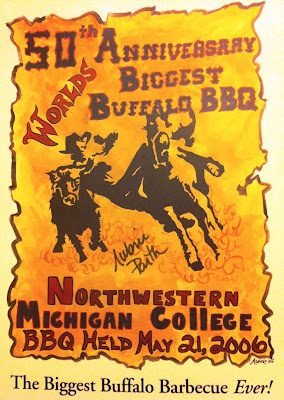 Every year my community college hosts a Buffalo BBQ and on their fiftieth anniversary they also hosted a poster contest for all the local high school students. The idea intrigued me because at the time, that's what I wanted to do. Well, I wanted to design movie posters, but this was close enough at the time. I ended up winning first place with this beautiful poster. I started by painting the background with acrylics and then I hand painted the writing. The center silhouette was first built on the computer and then I printed it out, taped it to black construction paper, and cut it out using an exacto knife.

This piece was an exercise in color schemes. It's a monochromatic color scheme. This is another project that I made by hand. Nothing was compiled on the computer. Instead, I collected magazine clippings, cut them out using an exacto knife, and placed them in an order that looks natural. 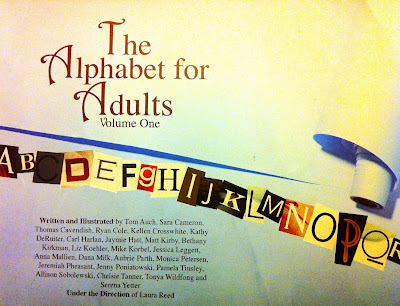 In my InDesign class, every student was given the opportunity to design the cover for an adult alphabet book. Then, when all the student projects were completed, everyone in the class voted for the cover they liked the best. The winner's design would be printed as the cover for the book. Unfortunately, I came in second, so my design was not printed, but I was very proud of it. This piece was compiled by hand and on the computer. The background and the letters are magazine clippings that I pasted together and then scanned into the computer. Then, I modified the color of the background and added the title and student names using InDesign. 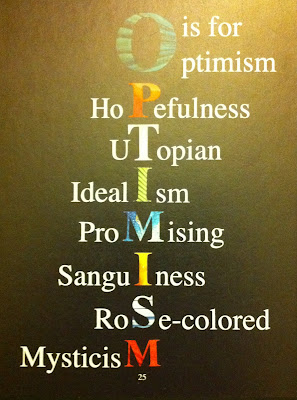 This is the page I designed for that same adult alphabet book. My prompt was "O is for Optimism." One thing I always loved to do as a kid was take someone's name and use the letters to spell other words that were the characteristics of that person. Using the same idea, I found synonyms of "optimism" and used them as the design. Again, this piece was done partially by hand and partially on the computer. I started by printing Optimism in big black letters which I used as templates to cut prettier versions of the letter out of textures I found in a magazine. I then scanned the letters back into the computer and added the black background and remaining text.
Written by AubrieAnne at 9:45 AM

Email ThisBlogThis!Share to TwitterShare to FacebookShare to Pinterest
Labels: Art

Thank you for adding to the conversations! This blog is a part of the "Follow Me If You Dare Revolution!" Join the Revolution here...http://whosyoureditor.blogspot.com/p/do-you-dare_18.html...to promote the best kind of following!

Search Who's Your Editor?